Recently I have made a list of few Indian bloggers who have shared their Income Reports. Just then I was anxiously waiting to see how will that post go about and to my surprise it did hit one of the most visited posts in Blog in Grace. Now I wanted to make a list on top 30 Indian blogs based on their Alexa ranking. Though Alexa ranking is not a preferred way to rank or estimate site’s traffic or success rate, still this is the only reliable source which I felt can be taken into account.

I have carefully made an investigation on many Indian blogs and have come up with the list. I have also omitted few bloggers like Neil Patel who is of Indian origin but born and bought up in London. Aseem Kishore of online tech tips though an Indian, blogs from Texas. I have also omitted entertainment blogs(missmalini, bollywoodlife etc) just for a reason. All the blogs given in the list are purely of Indian origin. 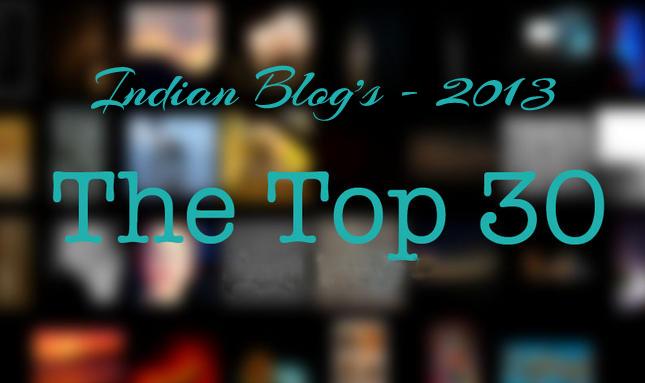 Disclaimer: Blog’s featured in this list are ranked based on Alexa Ranking which are recorded at the time of writing this post and are subjected to change in future. The ranking is not permanent as it may vary depending on many other factors. If you would like to be featured in this list or know any blog that should have made the list, please comment below!

1. Firstpost: This blog is similar to Huffingtonpost, which brings out latest news and trending topics of India. This blog is headed by R Jagannathan who serves as the Editor-in-Chief and it is a product of a Network18 Company.

2. Labnol: There is no need to give an introduction to this blog as it is the top how to blogs of India run by Amit Agarwal. This blog started way back in 2004 and tasted success within a short time. With this blog Amit Agarwal has turned to be a full-time blogger and is regarded as the first professional blogger of India.

3. ShoutMeLoud: This blog teaches on how to blog and various aspects of blogging like SEO, making money guides, blogging tips, designing tips, web hosting, domain, affiliate marketing, WordPress Tutorials etc. This blog was started in 2008 by a Delhi based blogger Harsh Agarwal. Recently he has also been featured in the week magazine.

4. Fonearena: The quest for technology is always at high and for a mobile the craze is unending. Fonearena is a blog which features only on mobiles giving release information, specifications and rates of various brands ranging from Nokia, Samsung, Apple to low-end brands like Micromax, Spice etc. This blog is founded by Varun Krishnan and has some top-notch contributors bringing in articles.

5. NextBigWhat: This blog was formerly called as pluggd and just for matter of expansion and to give it a brand value it is renamed as NextBigWhat by its founder Ashish Sinha. This blog focus mainly on start-ups, entrepreneurs and news and information of various businesses in India. After its new name it did lost some traffic and Alexa rank but it soon took its position to be the 5th most visited Indian Blog.

6. Yourstory: Hailing from the same niche of entrepreneurship is one more blog called YourStory which is started by Shradha Sharma in October 2008. This blog features startup stories and articles related to entrepreneurs which is a must read for MBA graduates and people who love to take the entrepreneur path.

7. 9lessons: Srinivas Tamada a Chennai based blogger, actually a designer by profession started this blog 9lessons and is one of the most loved web designing blogs. He posts various articles on PHP, HTML, jQuery, Java etc. His wall script which works similar to Facebook wall is one of his famous and most loved scripts of all time. Interesting fact is 9lessons blog still runs on blogger platform and could be an inspiration to blogspot users.

8. SarkariNaukirblog: This blog is the first blog which started posting information regarding various job openings in government sectors since 2006. This blog is run by a home maker of two children named Manisha Sharma who is Delhi based and doesn’t like to be revealed. Though she maintains a low profile, she is featured in Economic Times and Hindu and is still most talked person in the blogging community.

9. Medianama: Medianama is a blog which mainly focuses on Digital and Telecom businesses in India. It also gives information regarding various businesses in India, their acquisitions, funding, news etc. This blog is founded by Nikhil Pahwa who used to work for contentsutra before founding Medianama.

10. BloggingCage: Blogging cage is a latest flick built by Kulwant Nagi a Haryana based blogger. This blog started way back in October 2011 and within three years it surfaced to be one of the most visited Indian Blog. This blog wouldn’t have made the top 10 list if Kulwant hadn’t run a blogging contest recently, which boosted the ranking to be one among this list. His interview series in his blog is also most loved feature to taste this success.

11. HellBoundBloggers: Pradeep Kumar a promising blogger, is the guy behind hellboundbloggers which is being run under slashsquare network. This blog is having more than 600 guest authors who have contributed to its success. This blog has articles related to blogging, technology, WordPress, social media etc.

12. Thewindowsclub: This blog posts stuff purely related to windows and is founded by Anand Khanse. Primary target of this blog is to post tips and tricks related to Windows 8, Windows 7, Windows Vista and also covers issues related to other Microsoft related operating systems.

13. Quickonlinetips: This blog posts technology related tips along with blogging tips, WordPress, SEO and some other popular categories launched in 2004. This blog is founded by P Chandra who is popular by his trade name PCHere.

14. Kaushik: Ashish Kaushik runs this personal blog which deals mostly on entrepreneurship. He is the author of two best-selling books, digital marketing evangelist for Google and co-founder of Market Motive. He has also received many awards.

15. Androidadvices: This blog is run by one of the famous and top technology blogger Amit Bhawani who owns more than 40 blogs. His personal blog too should have made this list but due to its dormancy it had lost its Alexa rank. The domain name itself indicates that this blog is on android gadgets and smart phones.

16. Trak: Trak is a multi authored blog run by Arun Prabhudesai which has diverse news and opinions posted. It also focuses on entrepreneurs, startups and mostly business scenarios of Indian companies. This blog is into existence from may 2007 and also been on the top 10 Indian business Blogs.

17. Telecomtalk: This blog is exclusively built inorder to reveal the telecommunication Industry of India. This blog is founded and headed by Tarun. There are many authors and guest authors who constantly contribute articles to this blog.

18. iTechcode: Amit Shaw is the founder of this blog who is B.Sc IT student. This blog contains articles related to blogging, technology, Gadgets, WordPress, SEO, Software Reviews etc.

19. Savedelete: This blog is a technology blog containing articles of Internet tips, social Media, Internet tips and mostly listed articles. This blog is founded by Jaspal Singh a mechanical engineer who loves designing and coding.

20. Bloggerspassion: A blog which helps on blogging tips to help part-time bloggers to become a full-time bloggers. This blog has stared in January 2010 by Tushar and is now under the supervision and ownership of Anil Agarwal.

21. TechTricksWorld: This blog has information about SEO, Reviews, Blogging, Social Media, PC tricks and all the stuffs related to Information Technology. This blog is started by two friends Atish and Zainil on June 4rt 2010 as a blogspot blog and later migrated to WordPress.

22. Chandoo: Chandoo is a web blog which has some awesome tutorials on MS Excel. This blog is founded by Purna Duggirala who runs his blog with a nick name Chandoo. He is an MBA graduate from IIM Indore and he was also awarded MVP status in 2009 by Microsoft.

23. Askvg: A popular web blog which covers Windows related tips, troubleshooting and customization. Vishal Gupta is the man behind this blog who has been awarded with Microsoft MVP award. This blog is also featured in various technology magazines like Chip, Digit, PC world etc. This blog also won the Best windows Vista website in 2008.

25. Techpp: I think this blog too doesn’t need any introduction as this tech blog has been in the media every now and then. Raju is the founder of TechPP which stands for technology Personalized which was former called as Technically personal has been launched in 2008 which focuses mainly on personal and consumer technology including gadgets and webtools. This blog has been featured in CHIP magazine, a popular Technology magazine in India. It has also been quoted and linked extensively on various leading technology sites like Techmeme, TechCrunch, GigaOm, CNET, Engadget and others.

27. Guidingtech: Abhijeet Mukherjee is the man behind guidingtech a most loved technology blog which posts how-to guides, lists and some of the evergreen content which net has ever experienced. This blog also have some contributors who constantly keep writing some quality articles for this blog.

28. Onstartups: This blog is mainly focused for people who are interested in startups and more precisely software startups. This blog is started by Darmesh Shah who had started his own software company at the age of 24 and also sold it for millions of dollars. So he teaches people on software startup from his personal experiences.

29. Probloggingsuccess: Problogging Success is a blogging guide which helps users to start a blogging business and taste personal success. This blog is founded by Jane Sheeba who also runs few more blogs and is an extraordinary guest blogger at some of the top blogs which made her to reach this success levels.

31. Skyhitblog: Avijit a 12th grade Assam based student has built this blog and became one of the rock stars of blogosphere in less time. He writes on Technology tips, SEO, Blog guides, Social Media Articles and Marketing guides. He is an active commenter in many blogs and he writes stuff based on his personal experience.

32. Nirmaltv: Nirmal TV is a blog focusing mainly on technology, blogging tips, software, freeware, free apps, mobile phones tips, web apps, etc related articles. This blog is founded by Nirmal T V who is a software engineer by profession and a civil engineer by education during 2007. He started his career as a full-time blogger since 2010.

Some of the blogs like Techie-buzz, Blogsdna, Amitbhawani, Blogsolute used to have good Alexa ranks but now they have fall short of their ranks to be included in the above list. Though these blogs have less Alexa ranks still they have very good page ranks. There are still many blogs which do good in terms of traffic but are not having proper Alexa ranks. Anyhow this article is just useful in giving information about some blogs which many have not know till date. So what are you thing about? Do you also want to make a place in the list then keep blogging.